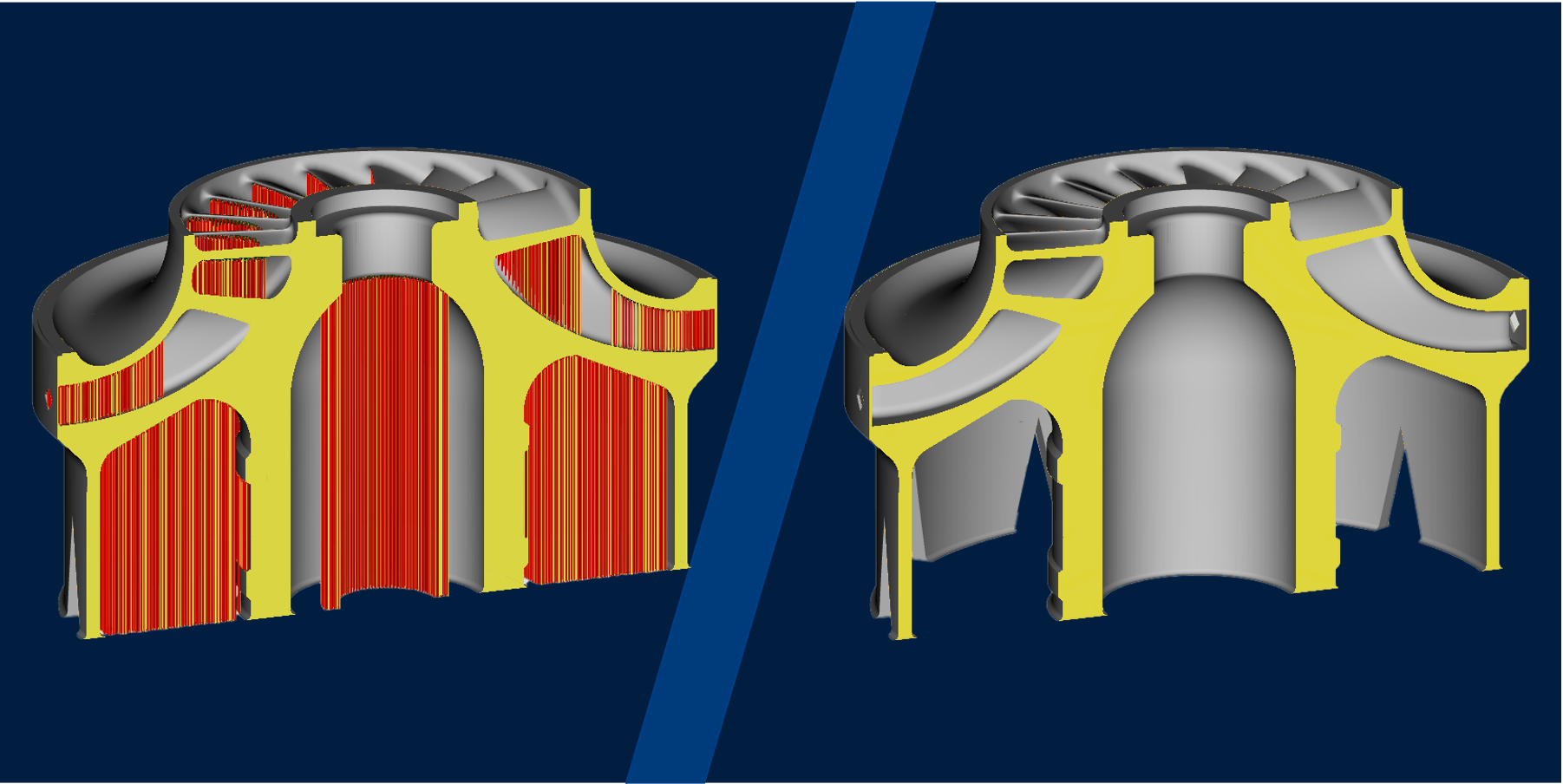 SupportFree - What Does it Mean & Why is it Important? 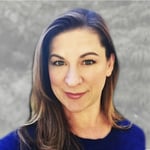 Kristin’s experience in Additive Manufacturing has spanned the 3D printing ecosystem, from service bureaus, printer OEM’s, software and material providers – across metals, plastics, and ceramic applications. Having begun her 3D printing career at LPW Technology (now Carpenter Additive), she recently returned to her metal AM roots as the Sr. Director of Product Marketing at VELO 3D. She was part of the product and market development teams for both the MJF (plastic) and MetalJet 3D printers at HP, led AM market development efforts at Thermo Fisher Scientific, and most recently consulted across the 3D printing landscape with her own consulting business, AM-Cubed. She is on the Board of Directors for Women in 3D printing and on the Advisory Board for All3DP Pro. She has an MBA from the University of Southern California (USC) and a M.S. in Materials Science & Engineering from UCLA.

I have been following Velo3D for several years now and what always sprang to mind was their SupportFree technology. Having just recently joined the company, I was given the opportunity to dive deep into exactly what this means and why it matters. I can say that after many years wondering if it was more hype than reality, I can confidently say that it is not.

It is important to understand why SupportFree matters, but first we need to understand exactly what SupportFree means. To start, the word “support” can be misleading, especially to those that come from the polymer 3D printing space. Supports in metal 3D printing are counter-intuitively more like “anchors”. What do I mean by this? Well, supports are put into place in metal 3D printing to hold down, rather than hold up, features within part. This is to prevent them from distorting from the residual stresses caused by the high processing temperatures, which will not only destroy the part but also cause the recoater to crash. 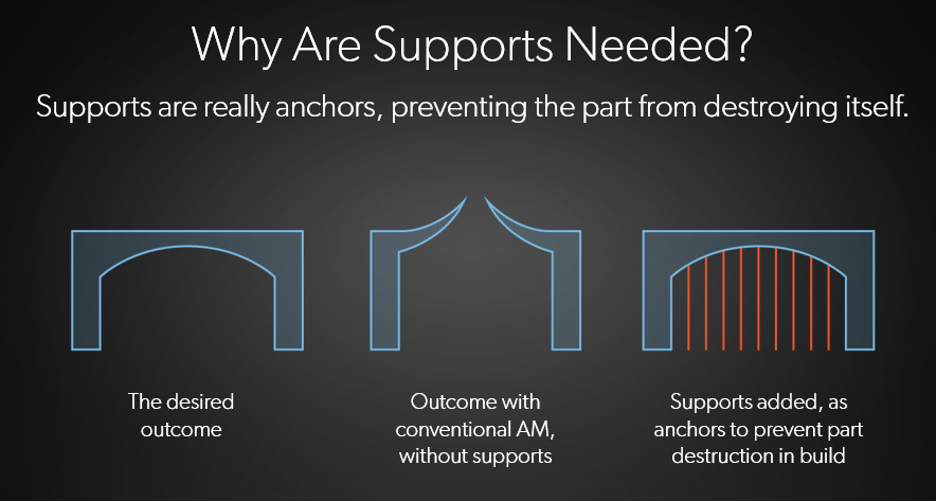 When are Supports Typically Needed?

Not all features require supports, but many do. The features that almost always require supports in typical laser-PBF systems are overhangs, holes, and channels. Considering additive manufacturing is touted to produce more complex parts with more intricate features it can be misleading, and frankly disappointing, to then learn that this can only be accomplished with the addition of multiple supports and/or counter-intuitive build configurations. Granted, in polymer 3D printing supports might not be as big an issue, since they can be dissolvable or easily removed. But, with metal 3D printing, supports can be difficult to remove (even if they are accessible), leave defects on the surface from which they are removed, and add significant time and material costs to the overall workflow.

The first feature that requires support is overhangs, typically if they drop below 45 degrees from horizontal. How many features can you imagine in a typical component that meet this criterion? Often many. A demonstration of what happens as the angle dips below 45 degrees is shown below. 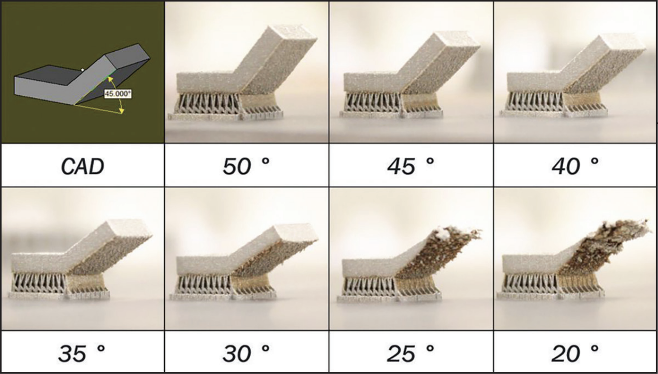 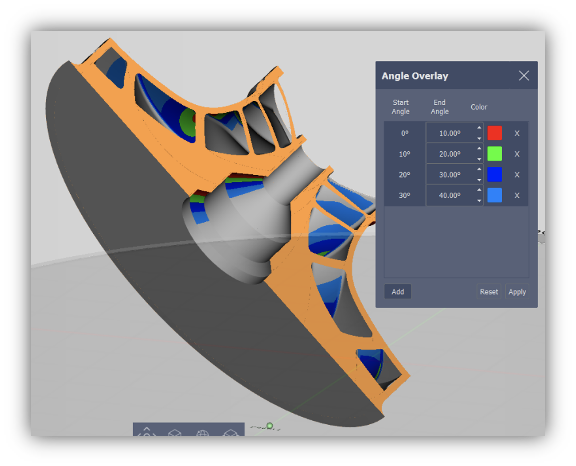 Many people approach shrouded impellers like this by tipping them up at a 45-degree angle. The problem with printing at an angle is that breaking the axisymmetry of the part leads to many issues. First, the circularity of any component that rotates is critical. When printing at an angle, this can be very easily compromised in terms of dimensional stability alone. Additionally, in the case of L-PBF 3D printing, the mechanical properties in the Z-direction can be different than in the X/Y plane due to the layer-by-layer process. So, by printing at a slant you will end up with mechanical properties that change as you go around the circle. This is especially problematic in applications where the part is exposed to high stress.

Inconsistent surface finish is another concern. The surface finish will be different at varying degrees of slant. This is not a concern if printed flat, because the variances would at least be symmetrical. Some might say that post-processing will address this, which is true -- unless you have those very complex internal features so heavily touted as a selling point for metal AM. Alternatively, abrasive slurry polishing is a popular solution, but it will not address these surface finish variations without removing a lot (and often inconsistent amounts) of material.

With Velo3D SupportFree, angles down to a fraction of a degree can be printed entirely without supports. So, in the case of the impeller above, it can be printed flat and without internal supports, maintaining part axisymmetry, and greatly minimizing post-processing.

The second type of features that often requires supports are holes and channels. It is widely accepted that L-PBF systems can only produce horizontal holes and channels around 8-10mm in diameter before requiring supports. There are design choices that can be made to try to avoid this, but none of them are ideal. Changing your channels into teardrop, elliptical or diamond shapes (per below) are the most common.

There are a few reasons why this would not be desirable. First and foremost, holes and channels are incorporated into designs for one primary reason: to facilitate the flow of a fluid (liquid or gas). In most cases, a circle is the most efficient shape for the flow of fluid, whereas the above shapes will certainly have a detrimental effect on fluid dynamics. Also, the top of the teardrop and corners of the diamond are serious stress concentrators, a big concern when it comes to pressurized fluids. Some might recommend filleting these corners, but this does not entirely remove the stress concentrators, it merely lessens them. And, by the way, it certainly does not help the situation with flow dynamics.

Alternatively, with Velo3D SupportFree process, holes and channels with inner diameters can be produced up to 100mm (~4”) in diameter. This 10-fold increase in allowable inner diameter greatly opens the design window for increasingly complex interior channels and truly allows the design to be optimized for function rather than manufacturability.

So, why does SupportFree matter? Well, it gives you design freedom. The ability to print those complex geometries and intricate internal features 3D printing has been promising all these years – without compromise. It also gives the designers and engineers an easier point of entry to adopting additive manufacturing. Without SupportFree, extensive Design for Additive Manufacturing (DfAM) knowledge is required, which teaches the designer the ins and outs of the required compromises rather than the unlimited design freedom we all are searching for. In short, SupportFree gives the power to design for optimal functionality rather than manufacturability.

So, what kind of applications benefit the most from SupportFree? In short, Optimized Designs That Control the Flow of Fluids or Transfer of Heat. Great examples of this include microturbines, air foils and impellers, heat exchangers, and manifolds with large inner diameters. The first application, microturbines, cannot be represented any better than by Sierra Turbine’s gas microturbines for hybrid UAV propulsion. And the second case study introduced below, Hanwha Power Systems, is a perfect representation of what can be done with shrouded impellers.

Sierra Turbines utilized the Velo AM System to produce a gas microturbine that could not have been produced any other way. This microturbine enables hybrid propulsion for high payload UAV’s with 40 times less maintenance, 10 times more power density, and a 50% reduction in weight. By printing this part with Velo’s technology, they were able to take an assembly of 61 components and produce them as a single part. 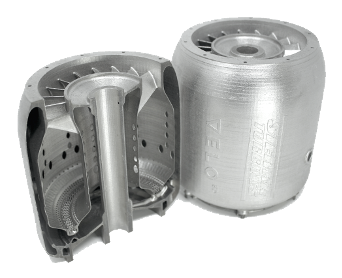 From the start, Sierra Turbines realized additive manufacturing was the solution to creating a truly unique and differentiated product. They spoke to existing vendors and were told that they could produce anything if it had angles of 45 degrees or higher. However, when it came to the airflow through the gas turbine engine, that constraint would disrupt the flow and does not really lend itself to an efficient engine. Ultimately, they found that the Velo platform was the only solution that did not require them to redesign their part for it to be manufactured.

How was this accomplished? The answer comes through utilizing Flow software to control the process and having the hardware that allows us to do it. From a library of pre-developed recipes, Flow can assign each feature a set of ideal processing conditions. Whether it is low-angle walls, vertical walls, or lattice and bulk structures throughout the part, specific processing conditions were automatically applied by Flow to mitigate feature-specific failure mechanisms and eliminate the need for extensive DfAM and specialized operator knowledge. 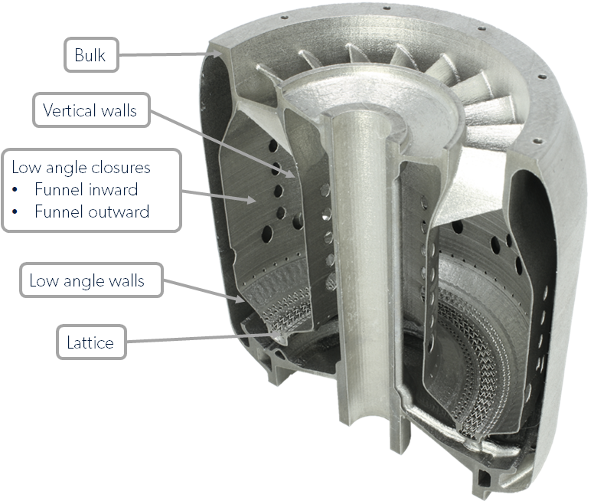 For a more detailed discussion on this use case, check out the complete case study here.

Hanwha Power Systems utilized Velo’s AM System to produce what was considered an “impossible part”, a mission critical shrouded impeller for supercritical CO2 systems. The operating environment for these systems is extreme in both temperature and pressure, which led to Inconel 718 as a material choice. Inconel 718 is notoriously difficult to machine and so AM is a logical choice.

A shrouded impeller such as this would typically be produced with traditional manufacturing techniques, which require multiples steps; machining of both the inner and outer hubs and airfoils themselves, welding processes to join the components, inspection of the welds, heat treatment, and final machining. It is a very complicated process to produce the part itself before you can even begin the final inspection. With Velo3D’s AM System, you can dramatically simplify the steps to the initial part. Ultimately, by utilizing Velo’s SupportFree technology, they achieved an 80% faster build time with 90% less material.

If this part were printed on a conventional L-PBF system, the necessary support removal would be an insurmountable obstacle. As can be seen in the image below, the number of supports would be prohibitively timely and costly to remove, if possible at all. And, as discussed above, the need for perfect symmetry on a mission critical rotating part such as this, prohibits a tilted print from the start. In short, SupportFree makes printing the ‘impossible part’ possible.

For a more detailed discussion on this use case, check out the complete case study here.

Whether it’s racing cars or missions to Mars, Velo3D is printing the future of innovation.